Lyon Airport Transfers run on Saturdays from January onwards, during the 2021 / 2022 winter ski season. We also have a special December service to Les 2 Alpes for the RISE festival. The resorts we cover include Val Thorens, Tignes, Val d’Isere, Les Menuires, St Martin de Belleville, Sainte Foy, Alpe d’Huez and Les Deux Alpes. Ben’s Bus operates a low cost but great value shared shuttle service. We are the cheapest travel option out of Lyon Airport and we have the best prices. A Return starts at just £58pp. We have been running low cost airport ski transfers since 2006.

We can also help if you are travelling to La Tania, (book to Moutiers) Peisey and Les Coches (book to Aime) or La Rosiere (book to Bourg St Maurice).

This will be the 8th year Ben’s Bus is operating ski transfers out of Lyon Airport. We offer regular and reliable shuttle buses to all the major French ski resorts. When you arrive at the airport, a uniformed Ben’s Bus rep will greet you and answer any questions you may have. We have phone numbers on our eTickets so you can contact our team if you have a problems. Our vehicles are parked right in front of the Terminal 1 (see below) so you do not have to walk far. This, combined with the great location of Lyon Airport, between the A42 / A432 motorways, means you will get to your ski resort as quickly as possible. All vehicles used by Ben’s Bus are fully insured, registered and licensed to operate in France. 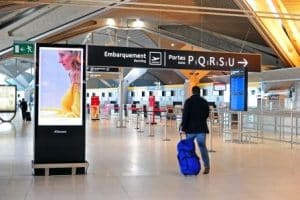 Lyon St Exupéry International Airport is situated 20 kms (about 13 miles) South East of Lyon. It is connected to the A43 motorway which connects Paris to Chambery, the gateway to the ski resorts of Savoie. Lyon airport was re-built and re-opened in 1975 and is the major airport for the Rhones Alpes area. It is serviced by many International and Low Cost Airlines. Flights arrive from various destinations in Europe, the Middle East and North America. It benefits from being quite a large airport and has all the amenities and transport links you would expect. It even has its own TGV train station! Lyon has undergone a large expansion project recently and the new Terminal 1 is now open, offering modern facilities and shorter walking times to the boarding gates.

HOW TO FIND THE BENS’ BUS REP AT LYON AIRPORT

Our coaches depart from Bus Bays 11 and 12 of the “Gare Routiere” on the Ground Floor of Terminal 1. On Saturdays our reps will be wearing blue Bens Bus uniforms and will be on hand to assist you. If you cannot find our rep, our drivers will have your name on his list and a sign in his windscreen. You can see a map of the Terminals here. To find out which Terminal your flight will arrive at, expand the section below “AIRLINES OPERATING OUT OF LYON AIRPORT”. Click on the image to the left to view the plan in more detail.

Lyon Airport is situated about 30 minutes (30km) South East of Lyon and about 1 hour (90km) North East of Chambery. It’s very conveniently located just between the A42 and A432 motorways, offering great access to the Alps.

As you’d expect from a large international airport, there are a decent amount of facilities, including:

There are a few hotels in and around Lyon airport, including an ibis and an NH. Try this website to see what hotel options are available. 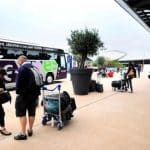 Lyon Airport is extremely well served by all the major international airlines as well as the low cost budget European carriers (except Ryanair). You can pretty much fly from any major airport within Europe. You can choose from British Airways, Air France, Aer Lingus, KLM, easyJet and Jet 2, to name but a few. UK airports that have flights to Lyon include London (Gatwick, Stansted, Heathrow & Southend), Bristol, Edinburgh, Birmingham, Manchester and many more. Skyscanner is a useful website which compares flight prices and times from a variety of Airports around the world

There is a train station sitting just adjacent to the airport building. It is a very short walk across a gangway and from here you can access the TGV high speed trains to Grenoble, Paris & Marseille with SNCF. The Rhones Express train service connects you with Lyon city centre (Lyon Part Dieu train station) in less than 30 minutes. They run 4 services every hour (2 services per hour between 4am-6am & between 9pm – midnight), every day of the year. It costs 15.20€ for a Single and 26.70€ Return. If you need to get to Grenoble city centre, there is a good service and you can see details here. From Grenoble, you can use the Transisere and Transaltitude website to book buses to many cities, towns and ski resorts in France.

There are nearly always taxis outside the Arrivals of Terminal 1. If not, walk into the Terminal building and ask one of the nice ladies behind the Welcome Desk.

See who we recommend for Private Transfers.

You could hire a car as many of the major players do have a base in Lyon Airport. Remember to factor in the cost of tolls, petrol, parking in resort, hiring snow chains and the hidden insurance charges that hire cars normally always levy at the airport.