We run Sainte Foy airport transfers on weekends to and from Geneva (GVA), Grenoble (GNB) and Lyon (LYS) airports throughout the 2021 / 2022 winter season. Our shared transfers operate from 4th December 2021 – 23rd April 2022, depending on which airport you use. We have many shuttle buses each day and we usually transport passengers in large coaches, which means cheaper fares and a lower carbon footprint. We have some great discounts for groups and children. Our prices start from just under £75pp Return.

Chambery Airport is the closest airport to Sainte Foy with the shortest transfer time, but it has a limited selection of flights. For a greater choice, consider flying into Geneva Airport, Lyon Airport or Grenoble Airport. The transfer time depends on the traffic and weather. We allow extra time for the journey when we know travelling conditions may be difficult, such as during the French school holidays. Sainte Foy is almost at the end of the Tarentaise valley road, the D902.

Geneva Airport is 155km from Sainte Foy. The transfer time is about 3 hours. A Return costs from £74.60pp.

Get directions from Geneva Airport to Sainte Foy

Lyon Airport is 202km from Sainte Foy and the transfer time is about 3 hours 20 mins. A Return costs from £75pp.

Get directions from Lyon Airport to Sainte Foy

Grenoble Airport is 190km from Sainte Foy and the transfer time is about 3 hrs 10 mins. A Return costs from £76pp.

Get directions from Grenoble Airport to Sainte Foy

Chambery Airport (CMF) is 124km from Sainte Foy and the transfer time is about 2 hours – 2 hours 30 minutes.

Get directions from Chambery Airport to Sainte Foy

Bourg St Maurice Coach Station is 12 km from Sainte Foy & the transfer time is about 20 mins. If you are arriving by eurostar and looking for transfers from Bourg St Maurice train station, we’d recommend the local Sainte Foy public buses or a private taxi.

IMPORTANT – PLEASE READ: Our bus will drop you and pick you up at the bus stop opposite the Hotel Monal in St Foy Village. This is the town on the main road between Bourg St Maurice and Tignes / Val d’Isere. There is a purpose built ski resort, “Sainte Foy Station” which is not on the main road and we do not stop there. If you are staying in St Foy Station, you would need to arrange onward transport, in advance, from our stop in St Foy Village to St Foy Station. The shuttle bus timetable can be found on the St Foy Tourist Office website  and we’ve listed a few taxi companies below. You can see our stop on google maps here. 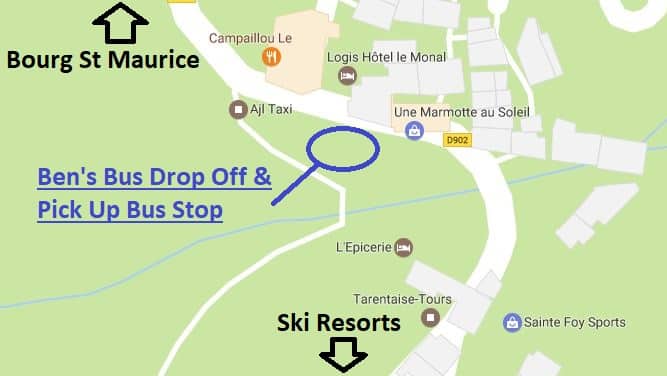 Sainte Foy-Tarentaise is an old Savoie-style village located on the road up to Val d’Isere and Tignes, about 12km from Bourg St Maurice. It remains relatively unspoilt and quiet but has enough restaurants and bars to keep you occupied, as well as a couple of spas. It is a mecca for off-pisters, but has little in the way of groomed slopes or lifts. However, the Espace Killy ski area is only a short drive away. You can therefore get taxis up to Val d’Isere or Tignes for day trips. There is also a free shuttle bus that takes you from Sainte Foy Station to the village of Sainte Foy.

Weather: Try the Meteo France for Sainte Foy for weather forecasts or the Sainte Foy snow-forecast for snow reports.

Live Webcams: Take a look at the Sainte Foy webcams.

Baggage Storage: The Bus Station in Bourg St Maurice runs a facility. More details can be found on our Baggage Store page.

Car Hire: Remember to add on the cost of snow chains, petrol, tolls, parking in resort and the insurance excess.

The following links will take you to the official websites for Geneva Airport, Lyon Airport, Grenoble Airport or Chambery Airport.