DRIVING TO THE ALPS FOR THE SCHOOL HOLIDAYS? READ OUR TOP TIPS ON BEATING THE TRAFFIC 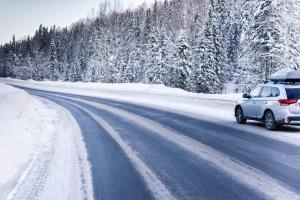 If you’ve driven to a French ski resort or taken a transfer during the school holidays, you’ve probably experienced some heavy traffic on the way to the Alps. Bottlenecks can form at places like motorway toll stations, and when 2 lanes turn into the 1-lane mountain roads, causing huge tailbacks. If it’s snowing, things can get really messy as vehicles pull over to put chains on or, even worse, lose control and cause an accident.

It can be a stressful start and end to your holiday – but it doesn’t have to be that way. We’ve created some top tips to help you avoid spending half a day stuck in a traffic jam.

WHAT ARE THE WORST DATES TO TRAVEL? 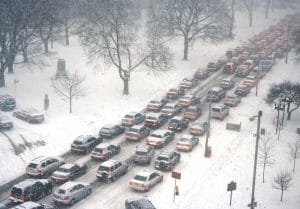 The French take holidaying as seriously as they take striking. Hats off to them, because they are pretty professional about it. They get 2 weeks off for Christmas and then another 2 weeks for February half term. In February they split the country up into 3 zones, each one taking a different 2 week period. This spreads the load evenly, but it means there are a total of 8 Saturdays in the winter season when the traffic can be pretty nasty.

Here’s a list of dates when you should expect a lot of cars on the road. You should plan your journey more carefully on these dates and take some precautions to make sure you don’t get caught out.

HEADING UP THE MOUNTAIN

HEADING DOWN THE MOUNTAIN

26th December & 1st & 2nd January – The January dates may not be that bad this year as the traffic may be spread over 2 days.

BE PREPARED – BRING PLENTY OF FOOD AND WATER

However you are getting to and from the resort, whether it be on a shared ski transfer with Ben’s Bus, a private transfer or driving in your own car, make sure you have enough food and water, especially if you are diabetic. Keep any medicines in your hand luggage and make use of the toilets before you get into your vehicle.

It’s not unusual for an airport transfer from Geneva to Tignes to take 5 or even 6 hours instead of the usual 3 & 1/2 hours. So bring a book, some games for the kids and lots of pre-downloaded videos to view on your device.

AVOID THE MOUNTAIN ROADS BETWEEN 8AM – 2PM

Plan your journey in advance. If you’re heading up to the resort, try to get to Grenoble or Albertville by 9am. Between 11am and 3pm the roads climbing the mountain can be moving at a snail’s pace. When leaving the resort, try to do it before 07:30 or after 14:00. The worst areas are between Bourg St Maurice – Moutiers (transfers from Val Thorens & Les Menuires don’t take that road), the Rocade Sud ring road south of Grenoble and the Lyon and Chambery peages are also quite congested.

If you’re on a Ben’s Bus leaving Grenoble, Geneva or Lyon Airports between 10am – 4pm, you will probably hit some heavy traffic. Your Ben’s Bus eTicket will mention if we have allowed extra time for your journey. If you are heading to La Plagne, Les Arcs, Val d’Isere or Tignes, our drivers may have to take a legal break en-route. This is to comply with EU legislation and is designed to protect all road users. Use the facilities at the airport or in the resort before you leave as not all of our vehicles have toilets. If you need to go en-route, just ask the driver to pull over at the next convenient place.

Book your ski transfer with a reputable and established company. Ben’s Bus has been working in the mountains for 15 years and works with local coach companies. Our drivers know the cheeky short cuts and how to avoid the bottlenecks. Our coordinators consult traffic websites and traffic cameras and our drivers and reps report where the roads are congested.

Top Tip: Don’t rely completely on Sat-Nav as it might try to take you across mountain passes that are closed in the winter!

The easiest way to avoid the rush and the crowds is to take your ski holiday in January or March. You’ll also get cheaper deals on accommodation and the queues for the ski lifts will be much smaller. Plus, you’ll get that table at your favourite restaurant! This website is a good source of information about school holidays in France https://about-france.com/school-holidays.htm Of course if you have kids in school, then that’s not possible.